By Rosemary Claire Smith on September 12, 2014 | Leave a comment

Some years ago, Analog published my story, Birch Glow, about glow-in-the-dark Christmas trees. The premise of the story was that the enzyme luciferase would be taken from fireflies and injected into trees so that nobody would ever have to festoon their Christmas trees with strings of lights.

Little did I know that luciferase is found elsewhere in nature, including in a species of mushroom known as Omphalotus illudens. Because it’s bright orange, it’s also called the jack-o’lantern mushroom. Nor did I suspect that I would find big clumps of these orange mushrooms growing on the wooded hillside behind my house.

So here’s what they look like in the wild in the afternoon. And in the dark, when you look at the underside of the mushroom, they say that its “gills” glow a striking dark green. Or maybe not, in the case of the ones I found.

Oh one more thing — as lovely as they are to look at, they are poisonous. While they may not out-and-out kill you, they’re said to induce symptoms that will make you wish they had done so. 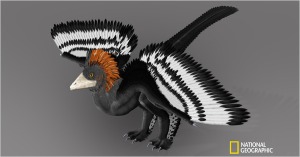 Today, I’ve just about completed the casting for the dinosaurs starring in a new story set in the Jurassic. The competition for a role in my story was tough, as I’ve said “sorry, no” to Allosaurus, and Stegosaurus, and the entire herd of Apatosaurs. I mean, impressive as they are, haven’t we all seen these guys enough already?

Besides, some fresh-faced discoveries are coming from China, and are they ever strutting their feathers. For example, Anchiornis huxleyi showed up for the audition sporting long black and white feathers on all four limbs, rather like a mutant chicken. Next, little Epidexipterxy hui, dropped out of the trees and wowed me with a set of upper and lower fangs that any vampire would envy. Even the modest little ornithopods are more than they seem. Naturally, one can never discount Juramaia sinensis, the mammal that just might steal the show.

In other words, I’ve been doing research. But don’t suppose that means the next step will be plotting, to be followed by writing. No indeed. I had already sketched out six scenes and written 5000 words before most of the non-human cast arrived. You see, when I’m enthusiastic about a project, I start writing as soon as any characters or critters start doing interesting stuff. Put another way, just as character and plot are intrinsically intertwined, I find that so are researching, plotting, and writing.

Did you know that today marks the 50th anniversary of the first space flight by a woman? She was Soviet cosmonaut Valentina Tereshkova. She orbited the Earth for three days, and that was a good twenty years before NASA sent Sally Ride into space.

Did you know that the second woman in space was Svetlana Savitskaya? In 1984 she became the first woman to “walk in space,” or more technically, to conduct extravehicular activity.

OK, so I’m guessing most of you reading my blog do know that Sally Ride was the first American woman to venture into space, as well as the third woman. But lest we suppose women’s astronautical achievements ended with her, consider that Peggy Whitson spent more time than any other woman on the International Space Station – over 376 days spread over two trips! She was also the first woman to command the International Space Station, and by no means the only woman to take a leadership role in the space program. Eileen Collins was the first woman space shuttle commander.

In closing, I’ll leave you with a link to this wonderful photo of Dorothy Metcalf-Lindenburger, Stephanie Wilson, Tracy Caldwell and Naoko Yamazaki aboard the aboard the International Space Station.