If you follow new developments in dinosaur research (doesn’t everyone?) you probably heard or read that an estimated 2.5 billion (yes billion with a “b”) Tyrannosaurus rexes roamed the Earth. That’s at least 127,000 generations over two million years. Nevertheless, that’s (gulp) rather a lot of tyrant lizards to contend with. But wait, how many might you be apt to encounter if you lived (tried to live?) in their territory?

This is where the figures get less definitive because they are based upon several estimates: longevity, growth rates, body mass, metabolism rate, geographic range of their habitat, acreage required to sustain a full-sized T. rex, population density for post-juvenile individuals, total length of time the species endured, etc. Some of these calculations are based on extrapolations from modern-day figures for large predators. Kudos to Charles Marshall (UC-Berkeley) and his team for tackling this question and putting together some figures appearing in Science, which they acknowledge could be off by two orders of magnitude.

Suffice to say, there may well have been around 3,800 of them roaming around an area as big as California. This comes down to two for some place the size of Washington, D.C.

Now here’s the question for today: If you could go back in a time machine to the Late Cretaceous of say 68 million years ago, where there was a risk/opportunity to see one of these great uber-carnivores, would you? There could be no guarantees as to your own personal safely or an actual sighting.

This question formed the basis for my interactive adventure novel, T-Rex Time Machine. You can take my time machine out for a spin and see how you fare during the heyday of the dinosaurs. No need to fret about a bad outcome, just play it again. I’d love to hear how you did! 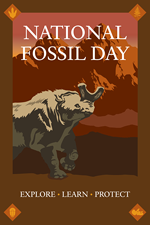 What’s new on this day dedicated to things ancient? Quite a lot! We have not just a slew of new species, but also spectacular preservation such as: 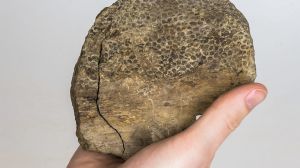 Did you know that since 1990 or thereabouts, more new dinosaur species have been identified by their fossil remains than in all the previous years during which scientists had been studying dinosaurs?

Lastly, hats off to the National Park Service, purveyors of insights about fossils: