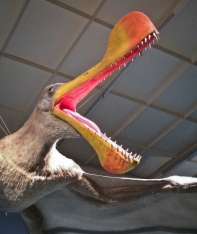 What stands almost as tall as a giraffe, has hollow bones as thin as a playing card, and a 33-foot wing span?

No, it isn’t some imaginary creature, but rather an extinct pterosaur that lived during the Cretaceous. I feature its relatives in T-Rex Time Machine, my interactive fiction RPG. Soon, you’ll soon get to spend time with this fabulous critter plus a slew of dinosaurs, courtesy of me, Choice of Games, and the raging power of your imagination. In the meantime, you could read some of my other dinosaur stories or check out some other remarkable games from Choice of Games. To say that I am excited about unleashing it upon the world is a vast understatement.

One neat thing about the games produced by Choice of Games is that you can play them again and again by selecting different attributes for your character, even different names and genders.