MY YEAR IN REVIEW

To my surprise, several people have asked if I intend to blog about what I’ve had published in 2016. Well, alrighty then, since a few of you asked …

Diamond Jim and the Dinosaurs– This novelette (3rd in the series) appeared in the April issue of Analog. Not only am I rather fond of it, but I’m also totally in love with the Bob Eggleton dinosaur cover on the magazine.

Not With A Bang-My first time travel story featuring Marty and Julianna was reprinted in the anthology Time Travel Tales.

Dino Mate – The sequel to Not With a Bang was reprinted in Ctrl Alt Delight.

Our Right, Our Duty, Our Privilege was the March Analog guest editorial.

On the Money: Scientist of Inventor Wanted – This guest editorial appeared in the November issue of Analog.

All in all, this hasn’t been a bad year by any means. In fact, it’s been a better year for me than this list might lead one to suppose. The reason I say this has to do with several things I’ve written that will be unveiled next year. 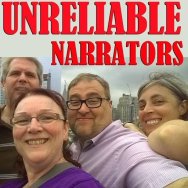 MidAmeriCon 2 was an all-round terrific World Con for me this year. Rather than ramble about this and that, I’m doing a series of retrospectives on some personal highlights, in no particular order. One was connecting up with writer buddies Cath Schaff-Stump and Christopher Cornell, whom I met at Paradise Lost. They’ve been putting out a podcast, Unreliable Narrators, that’s ridiculously good. For example, they’ve brought on some very talented SF writers like Ann Leckie and Charlie Finlay, who now edits F & SF.

So I was thrilled when Christopher squeezed my MidAmeriCon 2 dinosaur panel into his hectic schedule and mentioned our panel on the podcast. The ebullient Frank Wu led the panelists in a discussion of cool new developments in paleontology plus our conjectures as to courtship and mating strategies for enormous critters that have a row of spikes running down their tails. That’s a subject I’ve tackled in Dino Mate, an Analog story that’s been reprinted by Digital Science Fiction.

DINO MATE IS BACK IN PRINT

For everyone who can’t get enough of my dinosaur stories, I’m pleased to announce that the terrific folks at Digital Science Fiction have reprinted my stand-alone story Dino Mate. It features Marty and Julianna, the intrepid time travelers of “Not with a Bang” and “Diamond Jim and the Dinosaurs.” But the real stars are the Jurassic kentrosauruses, those fantastical creatures sporting spikes along their tails and the plates of a stegosaurus. They’re a little-known African dinosaur discovered over a hundred years ago in what was then German East Africa.

I hope you’ll give it a read.

Like Loading...
Posted in: Dinosaurs, Science Fiction & Fantasy | Tagged: Diamond Jim and the Dinosaurs, Dino Mate, Kentrosaurus, Not with a Bang, Time Travel,

DIAMOND JIM AND THE DINOSAURS

One of my favorite protagonists, Marty Zuber, returns to the pages of Analog (April 2016) to discover that the slipperiest of creatures may not be a Cretaceous dinosaur but rather is Diamond Jim, a fellow time traveler.  Worse yet, Diamond Jim has teamed up with Marty’s rival, Derek Dill. The story is set in Antarctica. Yes indeed, our southernmost continent teemed with all manner of dinosaurs, to say nothing of other exotic critters. The April issue of Analog should go on sale any day now. I hope you’ll continue to follow Marty’s Mesozoic adventures with Julianna, which began in “Not With a Bang,” (Analog, July/August 2013) and continued in “Dino Mate” (Analog, December 2014). If you missed those earlier stories, you can still obtain single issues. Also, check back later as I’ll have more news on where you can read about Marty, Julianna, and Mesozoic dinosaurs.

BACK TO THE FUTURE DAY 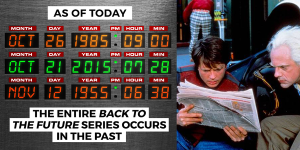 I’m happy to see one of my favorite time travel movies (the original, not the sequels) getting so much attention today. Not only is it a fun story, but it also happens to be the reason why I named my own time-traveling protagonist “Marty.”

Check out Not With A Bang and Dino Mate. I’m also thrilled to report that there will be another story in my own series coming out next year.

Like Loading...
Posted in: Science Fiction & Fantasy, Writing | Tagged: Analog Magazine, Back To The Future, Dino Mate, Not with a Bang, Time Travel, 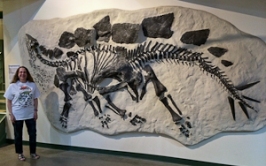 A while back I was chatting with a fellow writer of dinosaur tales. I asked if he worried that advances in paleontology would render some of the details in his stories obsolete. He said certain aspects of his major work had become out of date even before publication.

Ugh! How does a writer deal with this? For some time, I consoled myself with the fact that I loved as much as ever the classic dinosaur stories I’d grown up reading. So what if they did have a “brontosaurus” or two instead of an “apatosaurus?” And then, just this year, it looks as though the nomenclature may be swinging back in favor of “brontosaurus.”

Now, another surprising thing has happened, something that is the very opposite of what I had feared. A recent article in the journal PLOS One suggests that differences in the big bony plates running along the spine of one species of stegosaurus (Stegosaurus mjosi) may be the product of sexual dimorphism. In other words, males and females had differently shaped dermal plates. One sex possessed wide, oval plates 45% larger in surface area than the tall, narrow plates of the other sex. Intermediate shapes were not found. Given that a number of individuals were found together, the variation cannot be ascribed to different species. Nor is it due to changes as the creatures grew from infants to adulthood. Nor do the plates come from different positions on the back of one individual.

I’m excited by this development because my story, “Dino Mate,” published in the December 2014 issue of Analog contains speculation about the spikes on the kentrosaurus, which is a related dinosaur found in East Africa instead of Western North America. Without spoiling the story, I can say that I’m gratified to read of new scientific discoveries, which provide rich fodder for science fiction writers like me.

By Rosemary Claire Smith on October 9, 2014 | Leave a comment 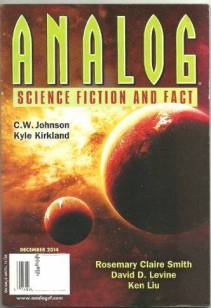 I’m happy to announce that the December issue of Analog will include a story of mine, which features some characters you may have seen before (in Not with a Bang) as they contend with some of my favorite Jurassic dinosaurs, including the Kentrosaurus.